This is a Bright post, not my usual style. I didn't personally make either of these quilts, but I had a hand in the making of each. This first picture is of a top that my daughter made when she was 15. 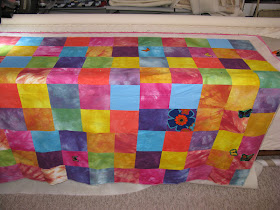 My contribution was to sooth her ruffled feathers when things didn't go the way she wanted and smooth out the inevitable bumps when her enthusiasm outstripped her skill. It was sewn on my overlocker, and because my DD only knows 2 speeds, Stop and Go, she managed to make mistakes much more quickly and with more drastic consequences than if she'd been sewing on a slower, ordinary machine. The cheerful applique butterflies are there to cover up places where the seams didn't quite meet, or the overlocker chewed up something that it shouldn't.

I also contributed the fabric from my hand-dyes, many of them made with my Scquilter friends in Rockhampton. We had some glorious days paddling around in dye buckets under a friend's house; it makes me want to do it all again now.

The top was rejected by DD when she finished it; it was supposed to become a doona cover for her bed, which was why she'd sewn it on the overlocker. Alas, her tastes changed like the wind, and she went with the aqua and silver sparkles look instead of hippy tie-dyes. I kept the top when I moved, being sentimental, but can't imagine it on a bed in my house. On Friday Mereth and I quilted it with a panto, and it's waiting to be bound and then donated to the bushfire appeal. Some other teenager will like it, even if she changes her mind a month later as teenage girls do.

The other quilt was made my mate in Western Australia, Blogless Kathy, from a pattern of mine called Irish Star. 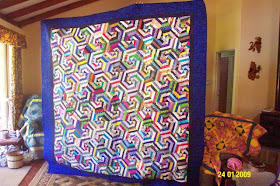 She and Nicola were making the units and swapping; haven't seen Nicola's yet (?) but this is Kathy's, and it's gorgeous. 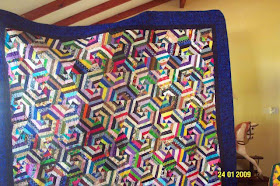 I love the bright colours, and that blue border sets it off beautifully. Sometimes I get tired of the muted tones of the Reproduction palette, and I just want to dabble in pure Colour for a while. Sadly I would need a whole new stash for that, but you never know, if I get busy with the dyepots I might be able to make my own.

On a sombre note, Australia's big dye supplier, KraftColour, lost everything in the fires. They will rebuild, but it will take time. As soon as they are up and running I will send in an order to support them. It will be good for them, and good for my stash.
keryn at 11:48 PM